This apparatus is a low-cost wave-driver and amplifier driven by a free smartphone app for investigating wave propagation in strings.  The wave driver can be used to examine properties of standing waves on strings as well as quantitative labs to investigate how string tension and string mass per unit length affect the wave speed. Not only does this set of labs establish the fundamental properties of mechanical waves, it provides an excellent experimental environment for students to collect and analyze data for a phenomenon that depends upon multiple variables.

Unfortunately, most science suppliers sell a wave driver apparatus in three parts: 1) the thing that does the shaking, 2) an amplifier, and 3) a function generator. Depending on the supplier, one full setup costs between $500 and $1000. This version costs about $30 in parts and takes advantage of the capabilities of your smartphone.

The apparatus consists of a 4-inch speaker, a 50 Watt mono amplifier circuit, a 12-volt power supply, and some laser cut acrylic pieces that tie things together. All parts are mounted to a central acrylic plate that includes notches for cable management when not in use. If you don't have a laser cutter, the base could be cut from wood. The device slips over a ring stand with a flat metal base. The metal rod acts as one anchor for the string and the acrylic pyramid mounted to the speaker cone shakes the string. The magnet in the base of the speaker sticks nicely to the metal base, and a hole in the acrylic plate locks it onto the ring stand rod. This makes the apparatus much heavier so that it doesn't wander across the lab table.

There are a variety of smartphone apps that feature tone generators or frequency generators for free. I've been using one called "Function Generator" on an iPhone which works fine, though it's filled with pop-up ads. You want a program that allows you to increase or decrease the frequency by tapping to increase or decrease the frequency in 1 Hz or 10 Hz increments. Interfaces that use a slider or require you to type in the frequency are difficult to use for this application. I want to give a shout out to the Physics Toolbox app that gives you access to all of the sensors in your phone. (Check it out!) The Physics Toolbox has a tone generator for Android that allows you to change frequency by tapping, but it does not work that way on iOS. Also, because newer iPhones no longer have a headphone jack, an adapter is needed.

Cut the base plate according to the template.

Strip and tin the wires from the 1/8" audio jack and solder them to the input terminals. 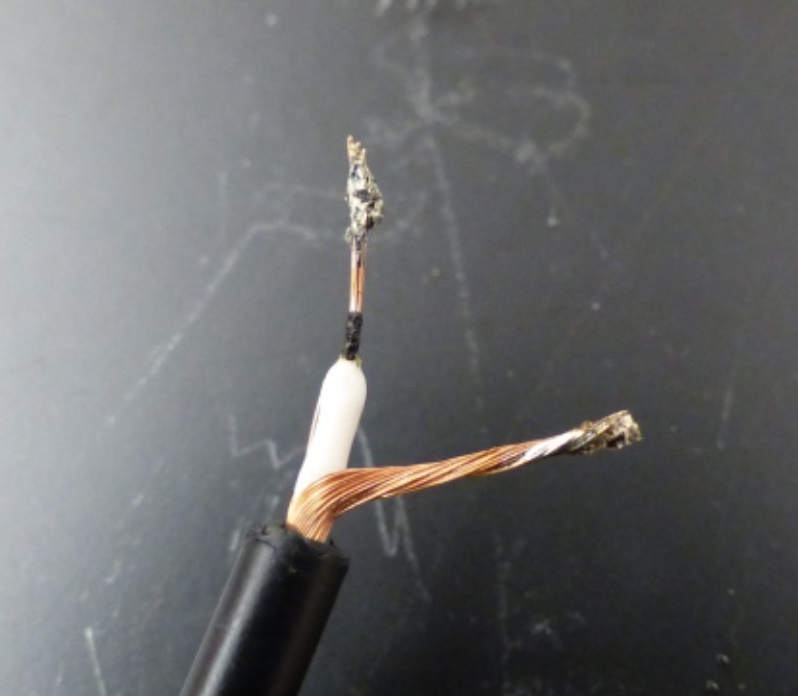 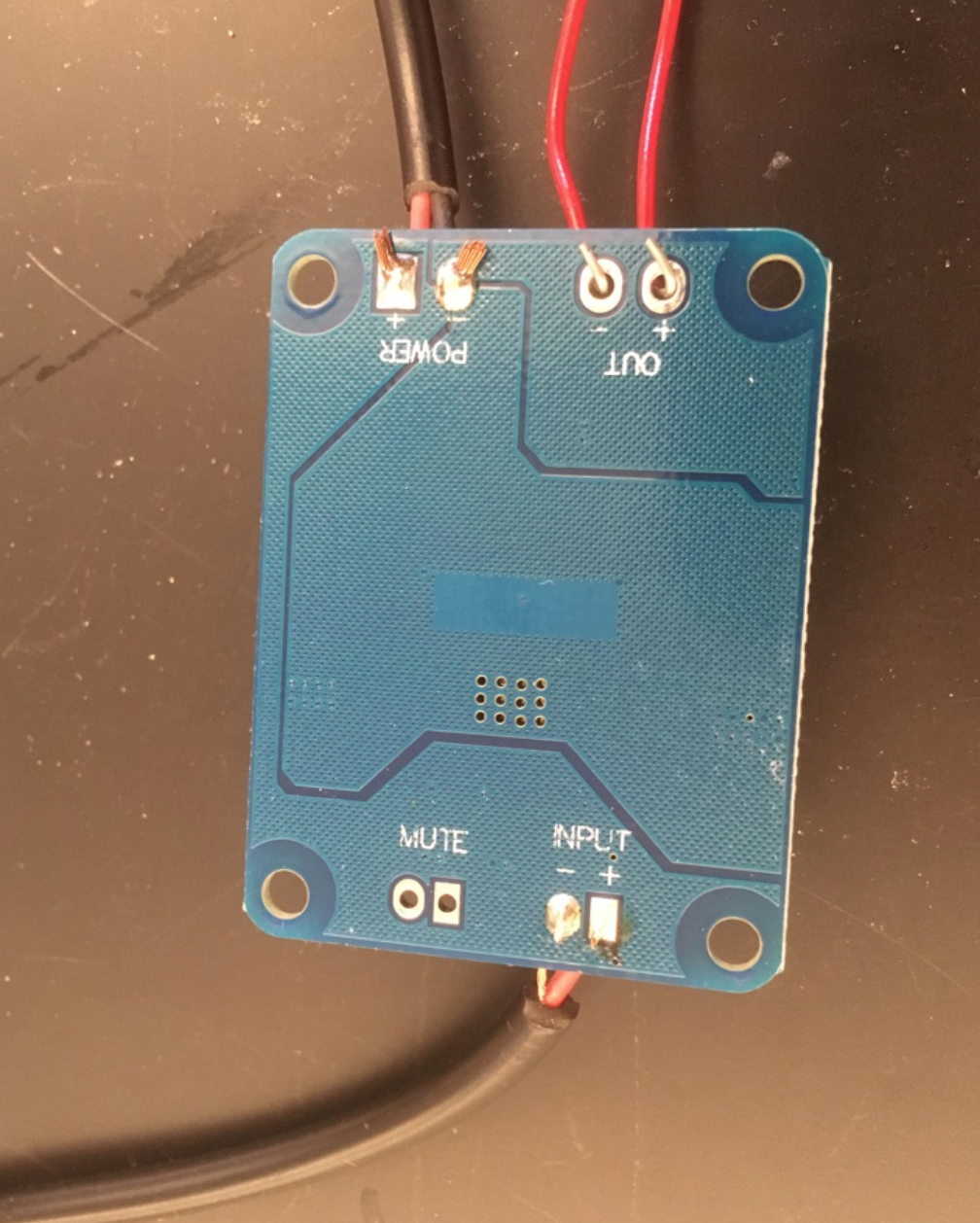 Test to see if the connections work by plugging in the power and plugging the audio jack into the phone. Play some tunes!

Use the nuts and bolts to attach the speaker and the amplifier board to the base plate.

Use hot melt glue to attach the wires to the base plate. This acts as a strain relief so that a tug on the wires doesn't disconnect them from the amplifier.

Use dabs of hot melt glue to affix the speaker attachment to the speaker. 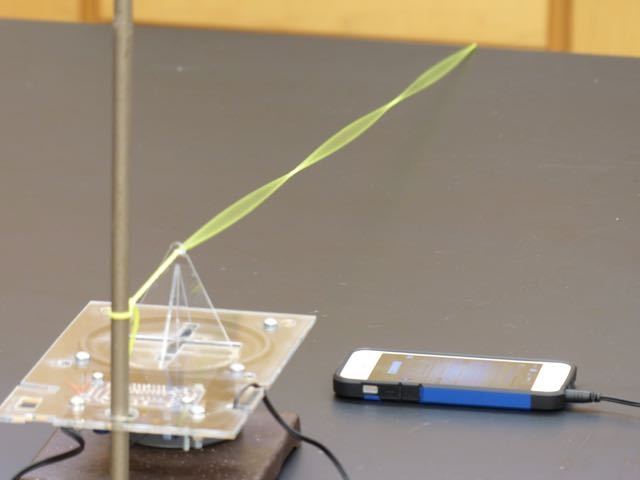 Tie loops at the end of each of the strings. I like using a figure-eight bight. Adjust the position of the string on the ring stand so that it exerts a light downward force on the speaker attachment.

Elastic shock cord produces particularly well-defined nodes and antinodes. Because it noticeably stretches as the tension increases, the mass per unit length of the cord changes. Therefore, use the shock cord for demonstrations and use the various thicknesses of cotton and nylon string for data collection. In the photos, I just let the cord dangle over the edge of the table where it is attached to a hooked mass. Especially for the quantitative measurements, bend the cord over a pulley to help ensure a consistent tension throughout the cord.

If the ring stand is clamped down, the tension can be made quite high, with several kilograms of mass hanging from the far end of the string.

Use a long slinky to develop the ideas of pulse propagation and resonance first. Working in pairs, students can find the resonant frequencies and determine the corresponding wavelengths. From this investigation, students find that wavelength is inversely related to the frequency. The proportionality constant is the wave speed.

In a darkened room, illuminate the vibrating string with an adjustable-rate strobe light. The strobe frequency can be tuned to "freeze" the wave in place, make the wave appear to move in slow motion, and make it look like there are two or more vibrating strings.

This apparatus was offered as part of a make-and-take workshop hosted by STEMteachersNYC, last run in 2017. Sign up for STEMteacherNYC's Google group to learn about future offerings of this workshop.

3D-Print Your Own Lab Clamps

The Richness of Learning From One Another